>> Click here to discover Audemars Piguet Watches that we have in stock. If you’d like for us to source another model / timepiece for you, please let us know. 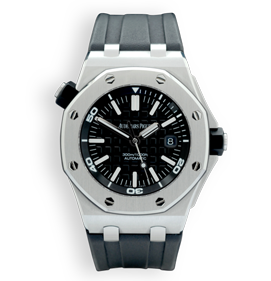 Audemars Piguet produces technical marvels. The lauded Audemars Piguet collections that catch light from the wrists of the world’s top celebrities and athletes today can be traced back to the cushion-shaped pocket watches that were preferred by gentlemen of more refined times. Nobody does “classic” better than Audemars Piguet. Of course, such well-done throwbacks should be expected from a company that has been building a reputation for beautiful, inventive designs since 1875. The fact that these luxury watches have such a long legacy should not cause anyone to forget that this is the brand that invented the concept of the modern luxury sport watch. In fact, they have become synonymous with the integrated-bracelet design that has dominated the watch world for more than 40 years. The actual story of Audemars Piguet goes back much further into history than that!

Their reputation for being an inventive watch company was solidified with the unveiling of the original minute-repeater wristwatch in 1892. The brand also gave the world the first skeleton watch. Of course, most people only know Audemars Piguet as the watch company that is responsible for the legendary, extraordinary Royal Oak. This gem from 1972 sets the bar in many ways. Its design is borrowed from the look of vintage diving helmets. The distinguishing characteristic of Royal Oak is the positioning of eight visible screws on the piece’s octagonal bezel. This is something that imitators have never quite been able to replicate with as much elegance and precision. Lido Watch Club is celebrating this favorite brand among watch enthusiasts and collectors by taking a look at the past and present of Audemars Piguet.

The story of Audemars Piguet begins in Le Brassus, Switzerland. A man by the name of Jules-Louis Audemars formed a watch company in 1875 that would go on to define what a quality Swiss watch could be. The trained watchmaker decided to set up shop in a region known as Vallée de Joux. Anyone who is familiar with Switzerland’s long watchmaking history would know that it makes sense that such an iconic company would be formed in the famed watch-building region of Vallée de Joux. Audemars brought in a man named Edward-Auguste Piguet to help run the company in 1881. History was soon made by the enterprising duo!

Both Audemars and Piguet were obsessed with pushing limits and pushing forward with innovations from the start. Both men had completed intense training as watchmakers before arriving at the helm of an up-and-coming timepiece manufacturer. The pair focused on designing intricate pocket watches during the early years of the company. The timepiece industry was put on notice when Audemars and Piguet won a medal at the Exposition Universelle in Paris for their early Grande Complication pocket watch. The fact that such a new company was getting such a high level of recognition was unique for the time. This early win helped to propel their brand to build the minute repeater with the world’s smallest movement. This feat was accomplished in 1891. The piece still holds the record for being the smallest minute repeated in existence. However, even bigger things were coming.

Audemars Piguet gets credit for being one of the first watchmakers in the world to dive into the realm of wristwatches. The beginning of the 1900s marked a time of extreme innovation for the company. The company seemed to break record after record with each new design that was unveiled. The first skeleton pocket watch was created by Audemars Piguet in 1934. The brand proudly rolled out the thinnest wristwatch by 1946. It was in 1975 that they  brought the first wristwatch featuring a perpetual calendar to the market. This was followed by the introduction of the thinnest self-winding caliber in 1967.

What came to be known as the “quartz crisis” in 1972 forever changed Audemars Piguet. The world shifted away from mechanical watches in the early part of the 1970s. Many people simply didn’t see or appreciate the art behind a well-made watch any longer. It was clear that only watchmakers that could adapt would survive. The company’s answer to the crisis was to unveil the Royal Oak. This Royal Oak is significant because it is considered to be the first luxury sport watch ever introduced. This beloved, iconic design is the world’s flattest automatic watch with a perpetual calendar. It dazzles by measuring in at just 6.3 millimeters in thickness.

The Royal Oak is essentially the watch that saved the watch industry. The fact they came up with a way to make watches relevant during a time when people were not interested in dressing up any longer was nothing short of a game changer. The Royal Oak adapted the concept of a watch to meet the needs of the time. The watch world is still reaping the benefits of this move. Watch enthusiasts know the release of this collection to be a pivotal moment in the world of timepieces.

How Much Do Audemars Piguet’s Cost?

As with any luxury watch, the prices vary greatly depending on collection, specifications of the model, and whether a piece is a limited edition or special edition watch. AP watches are known to be some of the more expensive watches on the market:

Royal Oak still dazzles with its screw-outfitted octagonal bezel. This first-of-its-kind luxury sport watch is as stylish as ever with help from a tapisserie dial and integrated bracelet. Royal Oak is a choice for those who will only settle for the original.

The Royal Oak Concept collection puts a futuristic spin on a watch that everyone knows and admires. This collection borrows many attributes from the original. However, the tapisserie patterned dial has been replaced with an open-worked face. Royal Oak Concept also changes the game when it comes to size. This upgraded model measures in at 44 millimeters. The most notable change is that the integrated metal bracelet has been swapped out for rubber and leather bands. Modern finishing techniques give this model a very next-generation feel.

The Code 11.59 collection is a fresh offering from the company. It was introduced in 2019 as the first new collection to come out of Audemars Piguet in 20 years. The consensus is that it was worth the wait. Code 11.59 is a unisex watch that’s oozing with practical handsomeness and sporty fun. The round design is a departure from the octagonal case that the brand is so famous for producing. Every watch in the Code 11.59 collection features open-worked lungs, glare-proof sapphire crystal and a size of 41 millimeters.

Millenary represents the mindset of a seasoned company looking ahead to the new millennium. Millenary rocked the watch world when it was released with an off-centered dial and elliptical case in 1995. This is a dress watch that blends technical complexity with visual abstractness. The diamond settings and open face of this watch make it a true work of art. Millenary is just as fascinating and stylistically relevant now as it was when it was released in anticipation of a new millennium. This piece serves as a reminder that one should constantly be looking forward at the twists and curves that are on the horizon.

Jules Audemars is a testament to the power of simplicity. The vintage aesthetic of this collection is praised for putting the focus on the art of making a mechanical masterpiece. Jules Audemars was created to pay homage to Jules-Louis Audemars. This is one of the reasons why it has become such a highly collectible piece among watch collectors. While the Royal Oak put Audemars Piguet in the mainstream, the Jules Audemars represents what the company’s founder would have actually worn in his day. This sensible return to Audemars Piguet’s roots offers much more than meets the eye once you drill down past its deceptively simple aesthetic. What’s more, it offers a nice option for anyone seeking a dress watch.

Audemars Piguet Is an Enduring Fixture on the Luxury Scene

AP also collaborates with a number of organizations and institutions. The list includes Art Basel and the International Union for Conservation of Nature. The Audemars Piguet Foundation was formed in 1992 to assist with the cause of worldwide forest conservation through environmental protection and education. In addition, Audemars Piguet routinely sponsors sporting championships and golf events that the brand feels demonstrate the same level of precision as its timepieces.

You’re looking at a genuine Swiss creation when studying an Audemars Piguet design. There really is no better brand to turn to when it comes to sourcing a sport watch. After all, Audemars Piguet essentially invented the sport watch that has become such a staple of the watch world. In fact, many credit Audemars Piguet’s 1972 design with keeping the watch industry relevant at a time when so many were losing appreciation for well-crafted timepieces. Lido Watch Club proudly helps admirers of this brand get the Audemars Piguet watches they are seeking. Let Lido Watch Club help to put you in the company of celebrities and athletes by connecting you with a beautiful Audemars Piguet timepiece.