>> Click here to discover Breitling Watches that we have in stock. If you’d like for us to source another model / timepiece for you, please let us know.

One watch company stands out for keeping time by land, sea and air. Breitling is a brand that shows off what Swiss engineering is capable of creating. This enduring brand has been setting the standard for luxury timepieces since it was founded in the later part of the 1800s. It is recognized today for its high-end collections and relentless innovation. In fact, Breitling is a leader for pilot watches, dive watches and chronographs. Breitling has increasingly placed its focus on making both mechanical and high-accuracy quartz pieces during the last 20 years. Another notable feature of modern-day Breitling watches is a heavy focus on producing movements in an in-house environment. A long history and desire to push limits combine to make a brand that is in a class of its own for delivering technical beauty and ruggedness. Lido Watch Club is taking a look back at 130 years of innovation from this company.

The Breitling brand was established in 1884 by Léon Breitling in St. Imier, Switzerland. Léon Breitling’s initial focus was on perfecting chronographs. The watch designer was able to obtain a patent for a chronograph pocket shortly after opening his workshop in St. Imier. The patent helped them to make the leap to a new factory in La Chaux-de-Fonds early on in the company’s history. It was there that 60 employees worked diligently to elevate the craft of watchmaking under the careful direction of Léon Breitling. The decade to follow would see Breitling make huge strides in the categories of stopwatches and chronographs. Important development was done specifically with tachymeter scales that could be used for speed measurements and pulsometers.

The company was placed in the hands of Gaston Breitling following his father’s death. The period under Gaston saw the introduction of the first chronograph wristwatches to ever be available on the market. The new design was interesting because it featured a completely separate push-piece component adjacent to the watch crown. What followed was a new patent for a chronograph watch featuring two distinct pushers.

Their legacy was placed under the control of Gaston Breitling’s son in 1927. Willy Breitling was still a teenager when he was put in charge as a result of his father’s unexpected passing. However, the new leader’s young age proved to be an asset. Willy soon guided the  brand to pursue several new patents and designs. One of the big achievements from the Billy Breitling years was an aviator chronograph featuring two luminous markings on the back dial. These oversized markings were accompanied by a rotating bezel.

Their story got a lot more interesting in 1938. This was the year that Billy Breitling formed what was named the Huit Aviation Department. This new endeavor was created to produce military and civil timing instruments designed as chronograph wristwatches and dashboard clocks for aircraft. The products that were made by the Huit Aviation Department were used by the British Royal Air Force during World War II. British bomber and fighter jets were outfitted with Breitling’s dashboard clocks throughout the war. 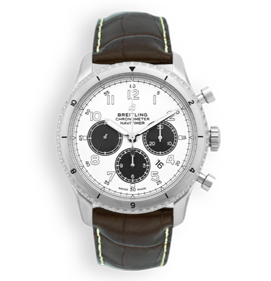 Growth kept coming for the company throughout the 1940s, 1950s and 1960s. This was the era that brought forth the famous Breitling tool watches. Some of the models from this era that still dazzle used Rolex and watch collectors to this day include the Chronomat scientist’s watch, the Superocean dive watch and the Navitimer pilot’s watch. Watch collectors also know 1969 to be the year that Breitling introduced one of the first automatic chronograph movements. The Chrono-Matic collection demonstrates just how beyond their time Breitling’s engineering feats were.

Breitling was not untouched by the Quartz Crisis of 1970s. The decade marked the first time that ownership of the Breitling brand was held outside of the Breitling family. A man named Ernest Schneider purchased the company from Willy Breitling. The Schneider era is marked by an obvious shift toward creating flashier watches. Designers at the newly revamped Breitling were focused on creating modern watches that could keep up with the world’s changing tastes. The market began to rapidly move away from traditional watches in favor of digital watches during the infamous Quartz Crisis. However, Breitling was able to keep its focus on creating high-quality chronographs. The emphasis on aviation is also something that has never left the core identity of the Breitling brand.

Breitling stayed under the control of the Schneider family until 2017. The company was ultimately acquired by CVC Capital Partners in 2017. The transition saw George Kern being put at the helm as Breitling’s CEO. The current era is an exciting time for Breitling. New designs coming out of the company are highly inspired by their vintage looks. In addition, the flashy looks that have marked the brand in recent decades are being replaced by subdued, scaled-down designs. The one thing that the evolving brand will not be changing is its faithfulness to developing aviation watches and expert chronographs.

Some of the Breathtaking Watches From Breitling

They have introduced some truly show-stopping watches over the years. Many of Breitling’s most attractive looks have also been historically significant. In addition, current Breitling designs are showing a true return to form that will make them instant classics. 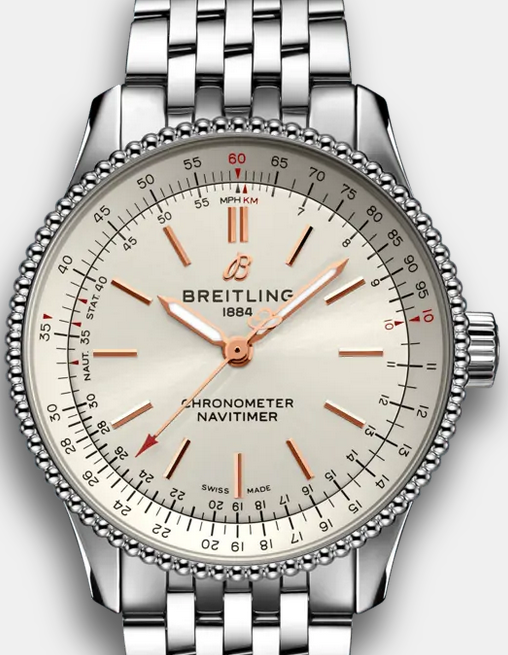 The Navitimer pilot’s watch was introduced in 1952, named as a combination of the words “Navigation” and “Timer.” This watch notably featured the circular slide rule from the Chronomat. This made the Navitimer a naturally worthy watch for pilots looking to calculate speed, distance and fuel consumption. A specially designed version of the Navitimer with a 24-hour dial was created for Scott Carpenter to wear during the 1962 Mercury-Atlas 7 mission. Production of the iconic Navitimer watch was maintained up until low demand during the Quartz Crisis caused them to cut the design from its line. However, the watch was reintroduced in the 1990s. The Navitimer immediately became one of the most desired watches following the end of its two-decade hiatus.

In 2018, the Navitimer 8 collection was introduced where they dropped the packed slide rule for a streamlined dial design. The Navitimer 8 was named after the Huit Aviation Department established by Willy Breitling in the 1930s where, “huit” is the French word for “eight.” The biggest difference between the two Navitimers is that Navitimer includes the slide rule, while the Navitimer 8 does not.

What Do Breitling Watches Cost?

The Brand Ambassadors Who Are Proud to Wear Breitling Watches

Not every serious Breitling fan is paid to show off their love of these watches. Jerry Seinfeld is known to be one of the most devoted Breitling fans on the planet. The comedian is routinely snapped wearing Breitling watches from his personal collection.

Add a Breitling to Your Collection