>> Click here to discover Rolex Watches that we have in stock. If you’d like for us to source another model / timepiece for you, please let us know.

Rolex proves that time is money. What is the Rolex story? You have to go back to 1905 to discover the origins of an iconic name that dominates the Forbes list of the World’s Most Valuable Brands. This is a story of limitless ingenuity and relentless precision. Of course, most of us simply know them as the most prestigious watch brand in the world. They are also linked with popular culture that it is the first watch brand that springs to mind for most people.

What makes a world-class brand like Rolex tick? Lido Watch Club is taking a look at the history and collections of Rolex to celebrate what many consider to be the most important timepiece brand of all time. The story of how the obsession with excellence is behind some of the best racing watches, military watches, dive watches and everyday watches in existence today began more than a century ago.

Rolex, a Swiss luxury watch manufacturer, based in Geneva, Switzerland, was originally founded as Wilsdorf and Davis by Hans Wilsdorf and Alfred Davis in London, England in 1905. Obviously, the brand grew to become the leading producer of luxury timepieces on the globe in the century that followed. Demand for their watches is as high as it’s ever been. In fact, Rolex produces nearly a million watches annually. It’s easy to spot one. A Rolex design showcases precision, beauty and quality in ways that competitors and imitators are incapable of touching. The mood simply changes when a person walks into a room wearing a Rolex. There is no stronger symbol for success and achievement than wearing one.

They dominate when it comes to both professional and sport watches. In fact, used Rolex collectors are seeing nearly unprecedented appreciation and demand levels. Lido Watch Club is proud to be a part of the enduring Rolex tradition by serving as a leading marketplace for these beautifully crafted timepieces. 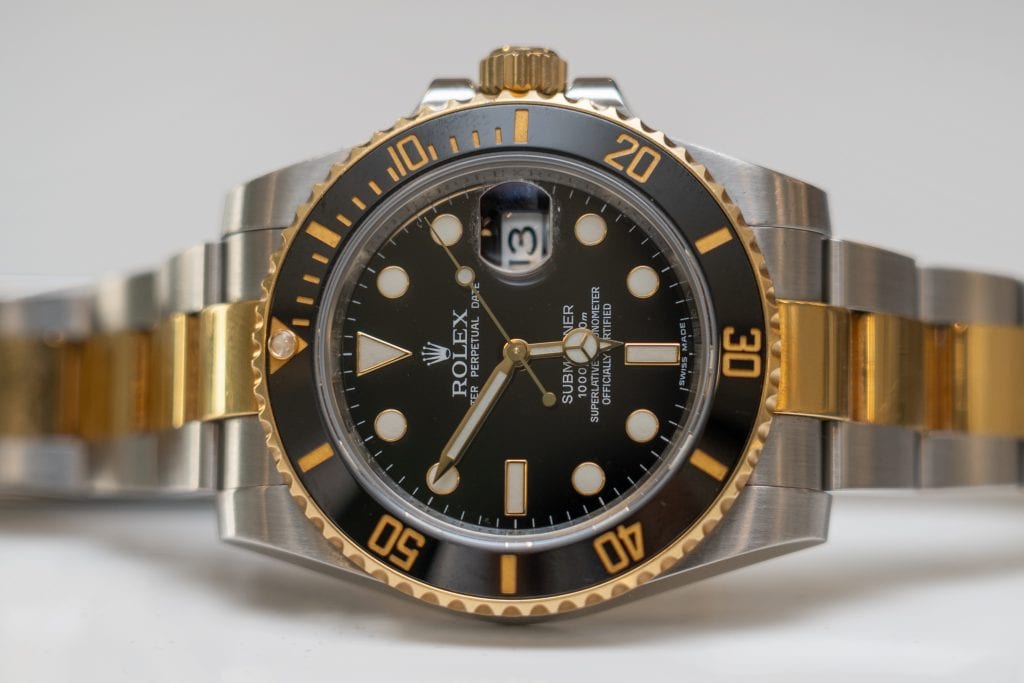 Hans Wilsdorf was just 24 when he started the Rolex company in London. Wilsdorf’s initial focus was on the distribution of timepieces. However, he quickly became dissatisfied over the fact that the timepieces he encountered on the market were not very precise. Wilsdorf began to envision attractive watches that could be worn on the wrist that also happened to be highly precise. You could say that the Rolex company began with the pursuit of perfection.

Hans Wilsdorf’s vision for Rolex immediately focused on quality of movement. This vision began a pursuit for unprecedented chronometric precision. Success came quickly. The Rolex watch had become the first wristwatch to ever receive the Swiss Certificate of Chronometric Precision by 1910. It was just four years later when the Kew Observatory in Great Britain awarded a Rolex watch a “Class A” precision certificate. This is significant because this very exclusive distinction had been reserved for marine chronometers up until this point. While the bar was set high based on these early successes, Rolex surpassed it at every turn in the decades to come.

How Did London-based Rolex Become a Swiss Watch Company?

Rolex moved to Geneva in 1920. The Rolex timeline becomes filled with record-breaking, industry-defying achievements from that point on.

Here’s a rundown of other industry-defying top achievements:

These accomplishments have helped Rolex to achieve the level of prestige that it enjoys today. However, achievements are only part of the story. It’s necessary to look closely at the dynamic models that have been worn on the wrists of some of the most influential people of the last century.

The Most Iconic Rolex Models of All Time

Rolex watches weave into world history like no other timepieces! Their collection has featured many special releases that many vintage collectors love to admire and chase down. Here’s a look at the watches that changed the world:

Those are some of the show-stopping models that get a lot of attention. However, they don’t represent the full catalog. Here’s a look at some other notable models:

These handsome watch models are considered to be among the best in history. This places them in very high demand among new and used Rolex fans. Of course, knowing the story behind the materials and methods used in  designs only amplifies the desire to own one of these treasures

Some Notes on the Rolex Style

Rolex typically uses stainless steel as its main material. However, luxurious styles are often fashioned using luxury metals like white gold, rose gold and yellow gold. That means that those looking for used designs have a variety to choose from. Rolex bezels and dials can be found in a variety of colors. Collectors will note that black, blue, green, white and silver are the most common colors seen. The size of these watches can vary depending on the style you choose. The size of a men’s Rolex can range from 34 millimeters to 45 millimeters. Weight will depend on the type of materials used in the design of a particular model. Luxury models are often given weight by the use of elements like diamond and gold.

While they are known for being a streamlined brand stylistically, we do see some embellishments pop up in certain models. Rolex is famed for its use of crystals in its watch designs. Most watch crystals used in vintage Rolex designs are actually acrylic. Some rare models feature crystals that are made from elements like mineral glass or sapphire.

Rolex straps and bracelets are easily identifiable and set apart from the designs of competitors and imitators. Rolex actually only utilizes a total of five strap and bracelet designs within its entire collection. Here is the list:

The Oyster bracelet is by far the most popular bracelet design. The Oyster’s three-piece links help to prevent stretching to create unmatched durability. Jubilee bracelets have been designed to resemble fine jewelry. Rolex actually offers several different colors to choose from when opting for a leather strap. While many people associate Rolex with its stately bracelets, the first Rolex wristwatches produced by Hans Wilsdorf at the dawn of the brand actually used leather straps.

Rolex’s incredible bracelets and straps cannot be discussed without mention of the brand’s iconic clasps. Rolex understands that the clasp is a vital element in a watch’s design. In fact, the clasp actually experiences the most pressure and wear among all parts of a watch. Rolex uses just three different clasps for its entire collection. Here they are:

Rolex has simply chosen to perfect its limited clasp selection instead of branching out in a way that could compromise quality. Rolex wearers know that their highly valuable timepieces will stay securely on their wrists due to the stellar reputation of the Rolex clasp. In addition, the lack of variety makes it much easier for both seasoned watch appreciators and novices to recognize authentic Rolex watches out in the wild.

The Durability of Rolex

Rolex marries luxury and technology like no other brand. Many owners are highly satisfied by the fact that they do not have to handle their valuable timepieces delicately or wear them sparingly. Rolex watches are designed to be durable and rugged even when they look like pure money.

The water resistance that’s offered is really what attracts so many to the brand. They offer unmatched resistance to water pressure. In fact, every single model offered is waterproof up to a certain amount of water pressure. What’s more, Rolex is continually improving its technology to increase pressure resistance for divers. While most people who wear one may never dive to great depths, all can enjoy the peace of mind that comes from knowing a valuable timepiece won’t be destroyed by exposure to water. The premium sport watches in the Rolex family can reach extreme depths. However, most of the mainstream models can only maintain water resistance up to a maximum depth of 300 meters.

Rolex enjoys iconic partnerships beyond the world of sports. The brand is currently partnered with the Academy of Motion Picture Arts and Sciences. Additionally, an run a philanthropic arm that works to make positive movements in the worlds of art, science and the environment.

The Celebrities, Sports Stars, and People of Influence Who Love Rolex

No brand attracts celebrities like Rolex attracts celebrities. This brand is unforgettably intertwined with legends like Paul Newman. In addition, modern movers and shakers want to be a part of the picture. Major stars like David Beckham, Bono, Jay-Z and Mark Wahlberg are all known fans. Roger Federer, Phil Mickelson and Jordan Spieth have all recently served as official ambassadors.

Investing in a Rolex Watch

Many people choose Rolex because they hold value better than products from every other timepiece manufacturer on a nearly universal basis. All Rolex models hold their value. Of course, you’re going to see much higher appreciation levels when it comes to specialty models. The bottom line is that people take notice when you show up wearing a Rolex. Lido Watch Club is here to help you find the perfect fit for the image you want to get across. Let us help you source a timepiece that signals prestige and confidence.